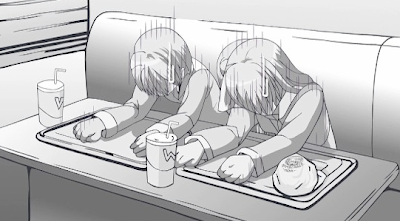 Thank God it's all over. It all couldn't have finished soon enough, and that was after abandoning Mayo Chiki!, R-15 and Kaitô Tenchi Twin Angel by their second episodes.

The summer season's shows were so tough to swallow this year that I almost didn't make it to 50% of the ending themes. In fact, I probably didn't make it—considering how many songs came from The iDOLM@STER and Uta no Prince-sama shows alone, I probably left a ton on the editing-room floor. I'm so burned out that a mindless second season of Shinryaku! Ika-Musume is quite welcome.

Since the ends of the shows were literally music to my ears, I probably enjoyed more ending themes this season than last. With this ranking of the best 15 ending themes of the summer, we finally end this sad season. Once again, all credits for the pictures go to CDJapan.

It's me! Whatever you do, stay away from R-15 and Mayo Chiki!

Somehow I must have sent a D-mail to myself from the future. I have the faintest feeling that I had warned myself not to watch much anime this season, and running the first three episodes of each anime over and over again in my mind pretty much confirms what I've thought.

There really wasn't anything in anime this season that was new enough to drag my attention away from the Spring 2011 shows that I've continued to follow. Likely it had to do with the waving flag of surrender constructed out of recycled anthology pages—eight shows from Shônen Jump ran on Crunchyroll, Funimation and Viz Media—but it probably has a lot to do with the deluge of average shows. Still plenty of beach episodes on shows that could have been mistaken for other shows. (Was I watching A Dark Rabbit Has Seven Lives or Kore wa Zombie Desu Ka? I can't remember.)

I did manage to stay awake enough to pay attention to the songs in the beginning and end. At least, I hope I did. Many of them, much like the shows themselves, failed to impress.