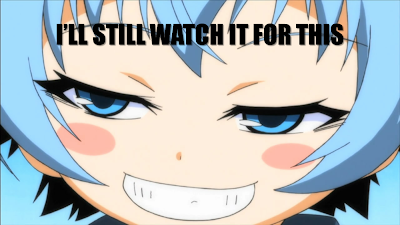 Actually, that was quite liberating.

Now that I don't have the pressure to defend Medaka Box anymore, I'm actually looking more forward to seeing how most of Spring 2012's shows end up. I mean, Tsuritama and Dusk Maiden of Amnesia have rolled into interesting mysteries of their own, while Space Brothers and Kuroko's Basketball are doing well to set up multiple seasons. I mean, I haven't even watched a single episode of Fate/Zero or Phi Brain this season, yet I haven't missed a single Polar Bear Cafe.

From the above you might be able to deduce what show gets tossed, since I actually have faith in the voters this week. Why not? I'll go with the opinion of the masses.

The ninth show to be cast off in Spring 2012's Anime Survivor is...

No, not these kinds.

Over the past couple of years, we've seen Crunchyroll try to sneak in a few shows that have specialized in five-minute anime shorts (i.e. Tono to Issho, Mori-san wa Mukuchi, Recorder and Randsell, Poyopoyo). By all means, there's nothing wrong with consumption before the entrees, as long as those between-meal "snacks" aren't too bad for you (Nyanpire has been said to cause tooth decay!)

So what anime shorts would you recommend to viewers? Phanton Thief Reinya? Double-J? Gakkatsu? Hit us with your favorite (and least favorite) shows in the Comments section! 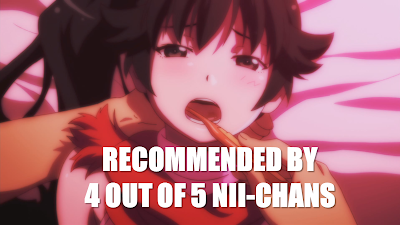 Yes, Spring 2012 may be one of the marquis anime seasons we've had in a while, but I still think back to how sour last season felt in the mouths of so many people. Fate/Zero had taken a depressing season off to recharge for its second half, while Bleach and Gintama' both hit a wall and departed from the list, leaving nothing but a deep freeze.

Of course, I was rather giddy once the Winter 2012 season started. Hey, it's Nisemonogatari! Nishio Isin is back with more of that stapler-wielding "tsundere" and all those creepy pedophile jokes affixed to the main character! It was incredibly funny then, but somehow sliding the donut-loving loli-vamp and the all-heat-no-flame "Fire Sisters" into the cast failed miserably. Oh, well. At least we got the most unintentionally comic episode of all time in the notorious "toothbrush" ensemble.

So many probably have that spite towards NisiOisiN still fresh in their gums like that last bit of spinach you can't quite get out. That's why the eighth show to get canned from our Anime Survivor cast is... 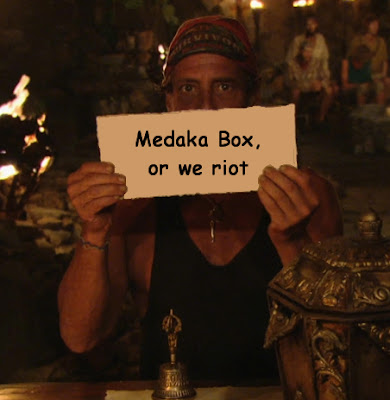 Okay, okay. The writing's on the wall. I can take a hint.

Still going to troll you guys over not liking Medaka Box before the good stuff starts. Yeah, it's gone this week, but not this half of this week. Before we dump the dead weight overboard, we're taking a different show off first!

The seventh show to leave Anime Survivor this season is... 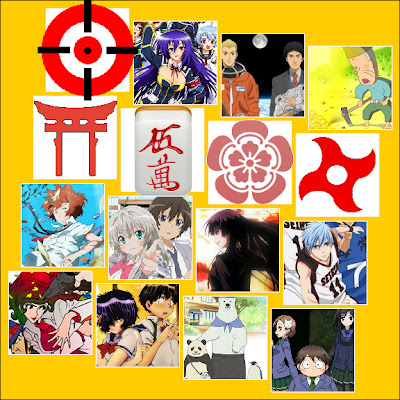 Let's cut to the chase. I feel guilty for showing Saki: Achiga-hen the door first, but it had to be done. More game strategy and less talky-talky, and I might have let it stick around longer. No one picked it to get dumped this early, but I'm sure at least half of you that cast your votes will be satisfied this week.

The sixth show to be escorted off the island in this season's Anime Survivor is... 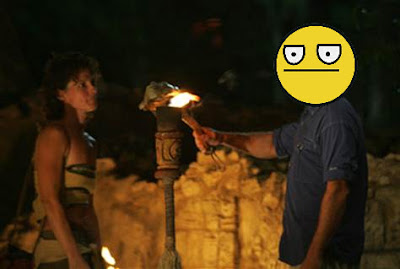 Three weeks of Anime Survivor down, and we're already staring at the halfway point of the anime season. Yeah, we started late this year, but can you blame us? There's been a lot of quality we've had to sift through, so we're not going to jump right in and cast our votes after only one episode.

I have no guilt about the first four shows that have been given the hook. Hiiro no Kakera is going nowhere, and now that the sides are set, I expect it to finish the same way that Fushigi Yûgi did. Unless Upotte!! manages to recreate the Invasion of Normandy as a sports festival, I'll have no interest in looking back.  At the same time, I'm noticing a pattern in the poll—you guys just don't like Medaka Box, do you? Way to hold a grudge against NisiOisiN.

Well, you won't see it disappear this week, either. Voted off the island as the fifth series to go during Spring 2012's Anime Survivor is... 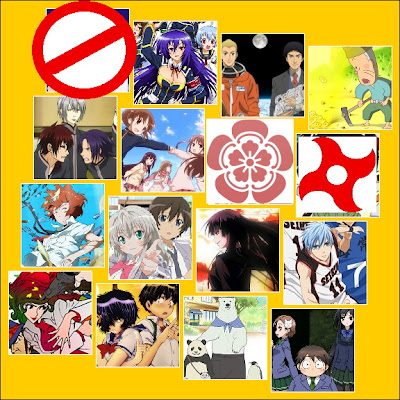 Lots of competition down here in the Blue Grass State this weekend. Yeah, there was that pretty famous race over at Churchill Downs, but I'm referring more to the "my-hat-is-bigger-than-yours" competition by the ladies in the galleries. Serious cosplay contests for the ojô-sama crowd. If people ever make fun of your anime or manga hobby or conventioneering down in Kentucky, easily refer to it as "the Kentucky Derby for nerds".

I suppose Anime Survivor will start to look more like a horse race from now on. I feel content that we've gotten rid of the worst shows that were bound for the glue factory—now it feels like the remaining shows at least have something in their arsenal that could get them to the finish line. That doesn't mean that some shows won't hit the dirt at the first turn.

I also noticed that a few people feel that Medaka Box is the next to go. Surprising? Perhaps not. I think Nisemonogatari, Nisio Isin's last anime, jaded a lot of people, so I don't blame some people for thinking it's too talkative. Perhaps we might be jumping the gun on this next project—I'm willing to let this show incubate another week.

So let's get this race over with. The fourth show kicked off the island in this season's Anime Survivor is... 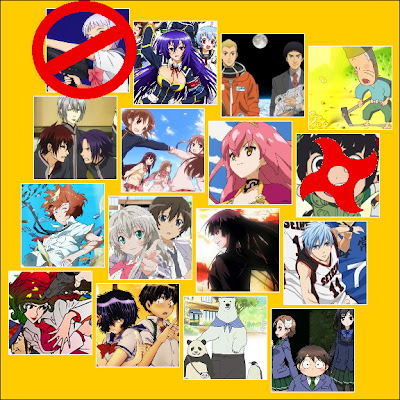 I know that people weren't too surprised at my pick of Rock Lee & His Ninja Pals as the second show to go this season in Anime Survivor. Too much immaturity for a spin-off show that could have used its popular minor characters in more constructive ways. Nope, I'm just surprised that we haven't seen another dog turd used as a ninjutsu projectile.

So what's the next series to go this week? It shouldn't surprise you, either—it's an amalgam of the two most overused genres in anime these days: harem animes and historical rewrites.

Without further ado, the third series to be escorted off the island in this season's Anime Survivor is...