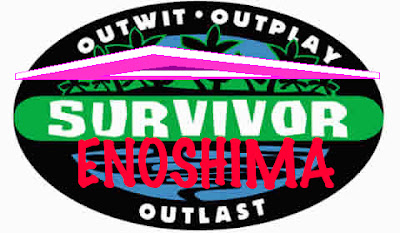 (Who knew that Tsuritama would turn into its own version of Survivor? I wouldn't be surprised if someone unearthed an Immunity Idol right at the climax.)

We started with sixteen, and we made it to two. Time to pony up and make your own argument. Should Tsuritama be crowned king of the island? Should The Woman Named Fujiko Mine make off with all the jewels?

Tell us in the Comments section which would get your vote and why. Maybe I might even base my choice off of the best argument! (And I just might—I'm totally stumped.)
Posted by Geoff at 9:20 PM 1 comments 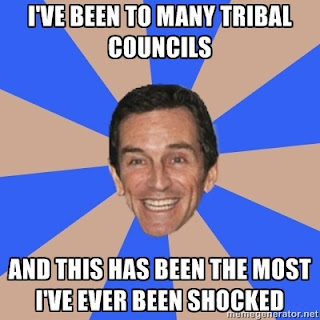 That likely means all three are already on board, just in time for me to push them off the plank.

After already claiming Kingdom, Funimation will grab Moyashimon 2 and maybe a panty-flasher like Dakara Boku ga H Dekinai, while Crunchyroll loads up on Natsuyuki Rendezvous, Tari Tari, Love, Election & Chocolate, Aruvu Rezuru, Ebiten, and Humanity Has Declined. Viz takes on the next Rinne no Lagrange season and contnues Accel World, while Kokoro Connect is lost once Sentai Filmworks grabs the rights.

But were all about the here and now. Three shows left. All are good, but one's got to hit the road.

The fourteenth show gone from this season's Anime Survivor is... 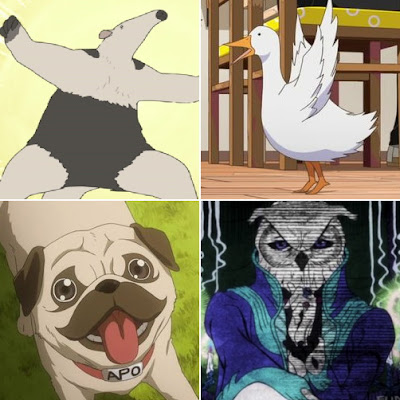 Let's face it, guys—if you had an awesome animal in your anime this season, your show was bound to make it to the semifinals of Anime Survivor.

Whether it's cooler-than-advertised Anteater from Polar Bear's Cafe, leader-by-default Tapioca from Tsuritama, the adorably-dumb Apo from Space Brothers, or even the parliament of owl-headed goons from The Woman Called Fujiko Mine (yes, a group of owls is called a "parliament"!)—everywhere you looked, BOSS ANIMALS.

So which one is lowest on the food chain? The thirteenth show to be sent to the glue factory in Spring 2012's Anime Survivor is...!

HOORAY! THE MUSIC GOT BETTER!

Well, I suppose everything generally got better this season. Last season's ugly opening-theme performance aside, there were just too many good shows in Spring of 2012 to screw up the OPs for the second season in a row. Even with the passing of the Gintama' anime, there was a lot to choose for musical services, and a lot of opening animations were nice to watch.

So just sit back and listen to the dulcet tones of Mutta Nanba(?) as we count down the Top 25 Opening Themes (and the Worst One) for Spring 2012. 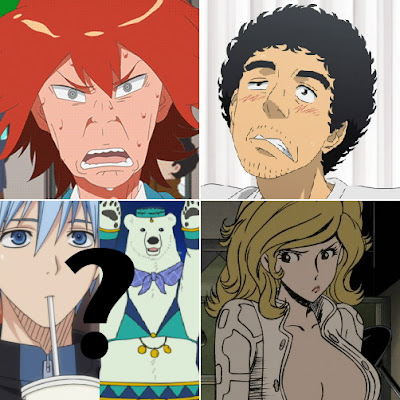 Sorry about the wait, folks, but you don't know how agonizing this last choice was. I had a eulogy written for both Polar Bear's Cafe and Kuroko's Basketball this week before my bed made me sick.

That's right. My BED. Apparently the thing's so ridden with allergens that my throat darned closed up on me. A shot in the hip (read: a shot in the ass) of steroids and a truckload of Allegra-D later, and I'm almost 100%. Just need a new mattress now.

Back to the story at hand. Let's face it; the top three seeds have been set in stone for weeks. Tsuritama has made a horse-race out of the noitaminA time slot, Space Brothers has been quiet and diligent in its story, while Fujiko Mine is somehow related to an owl (which might explain the hooters). Whatever. What matters is that there needs to be a fourth in the Final Four. 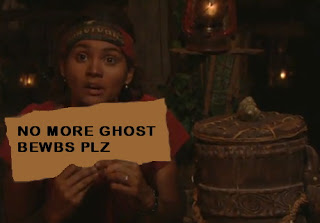 I don't have any good explanations why Accel World lasted so long. Perhaps there was a glimmer of hope in it becoming something more than a game and a bit of intrigue in Haru's character, especially with some clear lines drawn in the love polygons, but those of you who know me know I have a procrastinating side. I probably didn't feel the pressure to vote it out until it lasted further than expected.

Besides, I hated Haru's "cousin". Such a horrible attempt to introduce a new character.

That being said, the first to go in this week's Anime Survivor isn't that hard of a choice. Overwhelmingly, eleven out of twelve voters stuffed the ballot box with this show. Did I not pull the plug on this show soon enough?

The eleventh show to be cast from Spring 2012's Anime Survivor is... 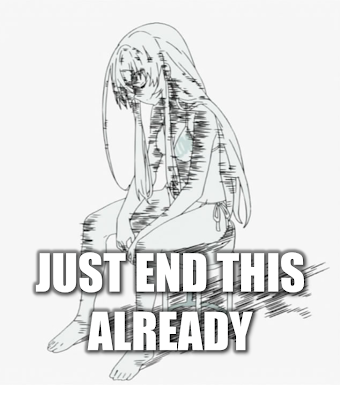 First off, an apology.

I know I wanted to review Kids on the Slope weekly for AniMaybe, but I suppose I have learned the hard way that weekly (or even monthly) reviews for the same show is something that I am not exactly built for. I found it difficult to do when I covered Rio: Rainbow Gate! and Dragon Crisis!, and even reviewing Puella Magi Madoka Magica was somewhat of a burden. I would rather judge by watching a show just once or all the way through, not by placing flags along the way.

You will get a Kids on the Slope review out of me soon. It's just that freaking good for a noitaminA junkie like myself.

That's probably why I'm hoping to finish this Anime Survivor thing soon. There hasn't been a lot of feedback on this new approach of reviewing, except for that one person on Twitter who was utterly shocked I dismissed Mysterious Girlfriend X this week. (Sorry, @ABCBTom. Had to be done.)

So let's get right to it. The tenth show gone from Spring 2012's Anime Survivor is...