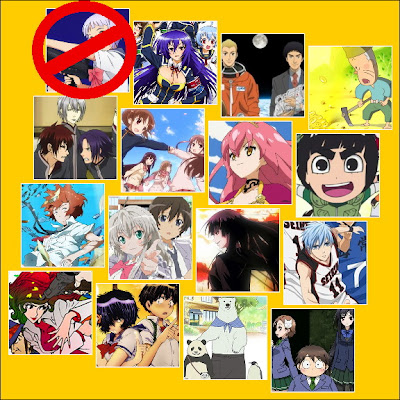 Don't you dare tell me that you weren't expecting Upotte!! to be the first show booted from our friendly game of Anime Survivor. The show was practically begging for sweet release from a hailstorm of bad criticism, and I'd be completely stunned if an actual storyline slithered out of that swamp. My guess is most people would agree with me—I haven't seen one glowing review of the show (but if you're willing to take a crack at it, defend it in the Comments section!)

This week, we have two more on the chopping block, but I'm surprised how easy this first pick was. Perhaps the high quality out of the gate from most of the shows this season quickly revealed what was collecting at the bottom of the barrel. It seems that some of you have done your homework and seen what I had seen, young grasshoppers, as six of the nine who voted on this week's poll thought this first series was doomed.

The second series (and the first to be associated with the Shônen Jump line) to be voted off the island is... 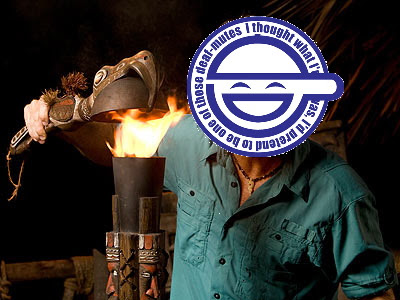 Sixteen possible survivors start out on a deserted island.
Which will be voted out first?!

Patterning an anime blog as a Survivor clone is probably not the most original of ideas, nor is it likely the best of them. After all, there are a million anime blogs out there (Vote for your favorite at the AniBlog Tourney! Or not! - Ed.), and chances are that some have gone the "reality-television" route. Hell, why haven't conventions tried some sort of "Cosplay with the Stars" idea?

However, I've found that the 2012 Spring anime season has presented a challenge that I feel hasn't been experienced before. We've suddenly been presented with a bountiful harvest of shows with more potential than a live wire. Crunchyroll pretty much flushed their tank, now that Gintama', Bleach, and Cardfight! Vanguard have wrapped up their animations for the meantime, and while they have beefed their lineup with the second seasons of Fate/Zero, Kimi to Boku, and Phi Brain, they've also added close to twenty new shows!

Funimation only added two new shows to their lineup to replace the powerful departure of Future Diary, but one of those titles is the new Lupin the 3rd spin-off featuring the busty bombshell Fujiko Mine. Viz grab two of their own in Accel World and Zetman, while The Anime Network/Sentai Filmworks is just happy to snap up licenses for home video release.

There are few surprises lurking outside of online streams—zombies were, perdon the pun, left for dead (Kore wa Zombie Desu Ka?'s second season was left untouched, while Sankarea is still homeless)—but I'd say this anime season should completely revitalize the fan base. There are a lot of shows to pick and a lot to weed out.

And that's what we're going to do at AniMaybe. Every week, we will look down the lineups and send one or two of the shows home with a lifetime supply of Rice-A-Roni until we get down to the one new show that summarizes the Spring 2012 anime season nicely. Of course, Kids on the Slope has been conveniently left off, since that will be reviewed weekly, but the sixteen other shows will get in the cage with only one walking out. 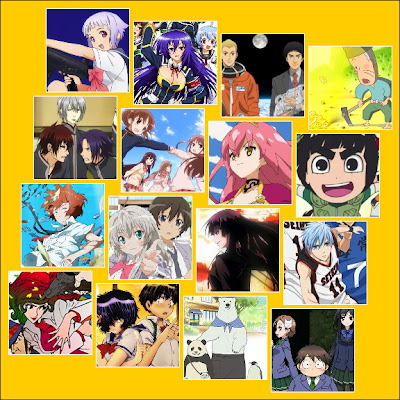 
There's our list of the sixteen combatants! The first show voted off of our island is...
Read more »
Read more »
Posted by Geoff at 12:13 PM 3 comments

I'll state my position on the Winter 2012 opening themes by restating my position on the ending themes. There was not a lot to be excited about. I have a feeling that many staffs asked their moneymakers to either take the season off or nap until it was time to shine for the last two minutes. I suppose that's why so many shows felt dry in Winter; too much hibernation, not enough hi-fidelity.

Okay, then. Let's try to pry whatever meat we can find on these carcasses left over by the buzzards and make some sort of ranking for the opening themes. Slim pickings, folks. Hope you have eaten earlier. 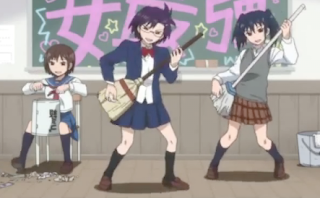 Okay, I'll set the record straight by admitting that I haven't had the endurance to watch anime since last summer. Last season was a struggle towards the finish line, so the otaku marathoner in me failed to train for the next big race. Why pull a mental hamstring while watching a Highschool DxD marathon when I should be resting up for the next season of Fate/zero?

That being said, let me wax poetic about this season's opening and closing themes by stating something I never thought I'd say—I actually liked this season's ending themes more than I liked the opening themes. It's hard to really explain why the magnetism has reversed its polarity, but perhaps the need to sell a series on its characters and plot to new viewers isn't as great as its need to keep regular viewers baited for the next episode. Personally, I couldn't be thrilled more, as we get the likes of ClariS, Aqua Timez, and Yôsei Teikoku filling the final slots.

Ready? Let's start at the end!