Now that our second Anime Survivor is underway (the first having contributed heavily to a desire to eat whitefish and a staggering fear of owls), I can honestly say that I have no idea what show will wear the heavy crown this time around. There are a handful that may make it to the finals, but I can't guess which would make it to the top. Perhaps this is a sign that I randomly chose all the good anime shows (or all the bad ones) for this contest.

In analyzing the other shows at their face value, I'd say that we're in for crazy weather. It seems that the bountiful harvest from spring (Kids on the Slope, Tsuritama, Fujiko Mine, and the close of Fate/Zero) has dried up into a dustbowl of barren choices. Again, I blame the lack of relief on the immense gains usually left for the equinoxes—Summer and Winter just aren't for fans.

That being said, I'm going to try to remain optimistic. There is still a chance we found some roses growing among the thorns. That's not to say that it's impossible to pluck the stinkweed from the bouquet. And La storia della Arcana Famiglia is a story in desperate need of some Prada perfume. 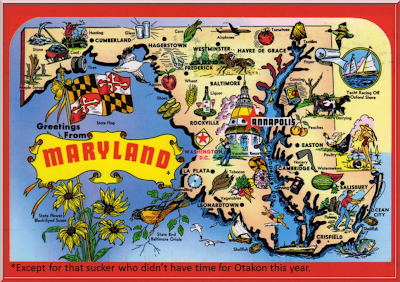 Hello from Otakon 2012! AniMaybe is having a great time in Baltimore! We're partying with cosplayers and attending all the big panels and industry announcements and glowstick-glowstick-glowstick dacing at raves and

Hardy har, Geoff. Joke's on you. Everyone and their tsundere sister is having more fun without you at Otakon, while you're stuck back home with your work and lack of a decent personal budget.

Fine. You know what? I am totally prepared to have fun without you guys. Screw y'all and your collective Haruhi dances. I'm going to have just as good a time partying with Crunchyroll and Funimation during...

(Oh. That's right. Everyone's at Otakon, so the announcement loses its punch.)

No matter! I'm going to run my own panel from the solitude of my apartment called "Geoff Tebbetts Actually Liked Hand Maid May: My Year With A Tsutaya Records Rental Card"! Just go ahead and party with the bigwigs from ANN! I'll be fine by myself!

It took me a few minutes to get myself together for the 25 Best Endings to Spring 2012's anime season. By the time I was done a few hours later, I liked only one of the positions, and that was naturally the top spot.

So to hell with keeping it a secret until the end—I loved the music in Kids on the Slope, and its ending was naturally the best and only one I wouldn't change. Hell, I may end up building my own soundtrack from the jazz greats that appeared in the show.

I will say one thing about the endings this season—I was severely disappointed. In a way, I put a positive spin on that statement, as there was so much that was good about Spring 2012 that there was very little to find flawed in general. Therefore, by default, the endings get my scorn, as I really only liked about ten of them.

So perhaps we should guess to see which one I didn't like at all? Come on. Guess. Betcha you get it right. 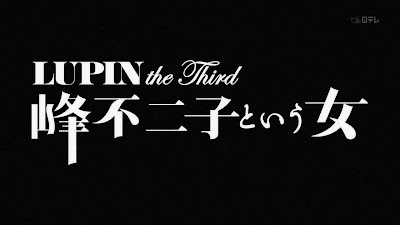 This is no secret, so I'll just come out and say it. Kids on the Slope (Sakamichi no Apollon) was the real winner to this season's introductory Anime Survivor. I purposely left it out of the equation, because I felt the variable was too obvious. Judging by the first episode and its staff, it was going to be the last show standing, not matter how good or bad Spring 2012 turned out to be.

However, I was also quite skeptical about the rest of the lineup. Would we all still have our faces buried in Bodacious Space Pirates, Fate/Zero and Phi Brain? Would we all be bitter about the dormant Winter 2012 performance?

Suffice to say, this season failed to disappoint me, and that in itself was a bit of a beautiful disappointment.

Now that the season's over, it's time to see what made Lupin the Third: The Woman Called Fujiko Mine so damned good. 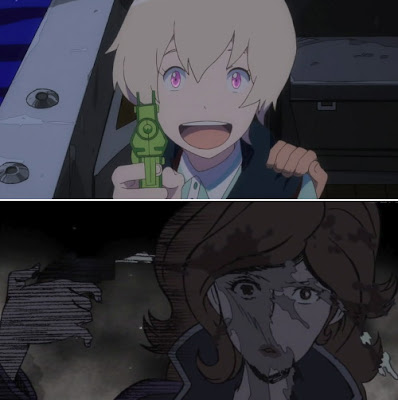 It feels almost inevitable that the final act during this Anime Survivor experiment would be between two shows that know how to use a squirt gun.

The tale of the tape in this last showdown couldn't be any more lopsided. Tsuritama is vibrant in both atmosphere and appearance, its characters rarely frowning, even in defeat or the midst of an oncoming natural disaster. Meanwhile, the Fujiko Mine animation is almost too dark for its traditionally-comedic roots, the improbable stunts by the Lupin the Third cast marred by Fujiko's tormented beginnings.

It's interesting that the squirt gun itself in one show is a portal displaying the other show's general vibe. An unexpected comedy relief in The Woman Called Fujiko Mine, yet an actual device that could be dangerous in the wrong hands in Tsuritama, the water pistol is pretty much the central device in this spring. It seems we'd need something to cool down an anime season that's been hotter than most in recent memory.

Enough of the chit-chat. That makes the announcement anticlimactic. The fifteenth show to be eliminated from Anime Survivor and this season's runner-up is...

(And yes, there are some spoilers ahead...)

Time out! Time out.


You know, playing soccer without stretching isn't a great idea.

I missed out on posting the Anime Survivor finals this weekend, but not a problem! With a major holiday this week, we can end it with a bang! (We really can—it's "buy one, get five free" at the fireworks marketplaces set up every two-tenths of a mile.)

Also, there are plans in motion to give AniMaybe a major face-lift. We're looking to change the overall design, as well as the name. If you have any good ideas (other than "Geoff's House of Suck-tastic Cardfight! Vanguard Reviews") for names, we're all ears!

And all knees, too. Man, those shiners are going to look bad tomorrow.