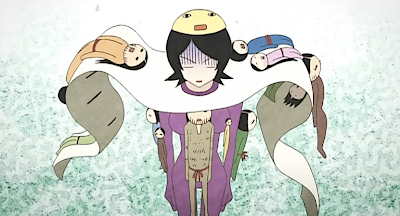 Vanilla. Mayonaisse. A one-dollar bill. A named background character in a Rumiko Takahashi manga. You're the Nami Hitô of anime.

This feeling of "normal"—this is sadly the feeling I had last season when I had gotten to the midway point of this whole "contest". By getting to the peak of the anime season, you've gotten past the indigestible curd, but you still have a ways to go before dessert is served. I have that exact feeling right now; I haven't the energy to scowl at the middle of the pack, but there's really nothing to praise about the work.

Considering Medaka Box, Mysterious Girlfriend X, and Folktales from Japan parked their Hyundais in a lot full of shiny sports cars and broken-down Edsels, I'm expecting mediocrity at this point. We got it with Moyashimon Returns, and it's likely we'll get it with our fifth place show, Chôyaku Hyakunin Isshû: Uta Koi. 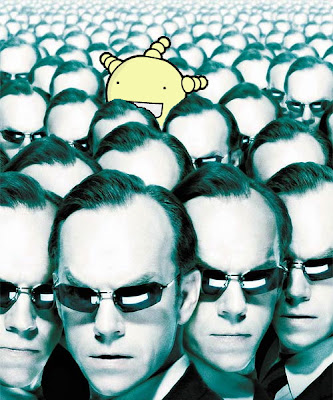 For the longest time, I had hoped that noitaminA would target the right shows for a sequel. So far, the only sequels have been Honey & Clover (back in 2007, before the first streaming anime shows were screened) and a few follow-ups to Nodame Cantabile. Since 2010, we have had a few two-cours shows, but one of them was Guilty Crown, and I'm pretty sure most of fandom isn't hammering down doors to get that one green-lighted for a return.

There could be many arguments that some don't deserve sequels (No.6, Hataraki Man) and that others would have continuity ruined by a second season (AnoHana, House of Five Leaves), but many could say that shows like Princess Jellyfish, Shiki, Eden of the East, and Fractale Tatami Galaxy are ripe and ready for one. You could say they are practically fermenting in potential.

How appropriate that I mention fermenting. It's just too bad this show wasn't left in the vat for a little longer. Sixth Place in Summer 2012's Anime Survivor is Moyashimon Returns, a noitaminA show that didn't deserve a half-hearted attempt at a sequel. I will be one of the few that will admit the luster wore off Hanasaku Iroha after the first season.

P.A. Works did a wondrous job animating the series, and it felt great to see an anime focus on something closer to the heart of Japanese culture and the whims of society. I think a lot of people take the small tourist-based businesses of Japan for granted when they watch them in an animated form, so it felt good to get a sense of realism surrounding the onsen inns of Japan.

However, that sense of realism seemed to eat at my core like a grater to my inner daikon. As time went on, I found myself disliking the false disconnect between the "realism" of an animated show and my own. I couldn't find myself accepting the characters as real people, and some of their personalities got under my skin. If anything, I found myself appreciating the stern leadership from Sui, the inn's matriarch, more than the bubbly effervescence of the shiny-skinned youths working at the inn.

When I learned that P.A. Works was going to release a show that had that same sort of feel and animation, I wondered if I'd be able to stand the characters, now that a connection was made to Hanasaku Iroha. I suppose that's a reason why 7th Place for this season's Anime Survivor goes to Tari Tari. One of the first titles that rooted me in anime and manga (and eventually reviewing) was Masamune Shirow's Appleseed for two very different reasons.

When I bought the compiled manga volumes from Dark Horse Comics, I wasn't exactly sure what kind of manga I liked. I was partial to Rumiko Takahashi's works, but mecha hadn't thrilled me that much. Voltron had caught me as a kid, but I never got into Macross and Gundam (as much of a sin that might be to some). Bubblegum Crisis didn't catch me right away, as it was still an expensive get. When I opened the pages to Appleseed, I finally got the picture. Machinery was cool, especially if there was an underlying point to all of this technology. The translation was complex, and the conversation was foreign enough for me to get lost in the electric traffic jam that Olympus brought with it.

Of course, then I saw the digital wreckage that the OAV series spawned. Limp animation was coupled with ham actors, and all of the philosophy and mechanical jargon were stripped to leave the beat-up heart of a jalopy. It was then that I discovered the power of a good mecha show—a good distribution of detailed technology, deep thoughts, and even a svelte body sliding into the mechanical shell was what made a good mecha show to me.

Well, it looks like we found a show that left just that last part. 8th Place goes to Muv-Luv Alternative: Total Eclipse. 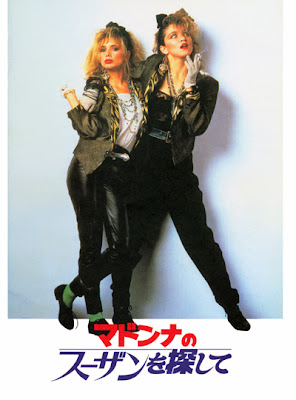 From now on, we're through with the whole "survival" angle.

Really, this season feels like "survival" applies more to the viewers than the actual shows themselves. Shows like Dakara Boku wa H ga Dekinai will be there when the season ends, but our resolve to endure all the harem shows absent from Spring 2012 won't be there. Many have already tapped out from the Boston Crab that the second season of Horizon on the Middle of Nowhere slapped on us. Those who have survived that wringer just for the sake of a happy ending in Natsuyuki Rendezvous will have to gut this one out.

That being said, it's going to be much more difficult this time around to get to the cream of this crop, but one thing still applies—a show that involves a gender-swapped ruler of Japan from the past can never be seen as a truly noteworthy accomplishment.

Ninth place in Summer 2012's Anime Survivor is The Ambition of Nobuna Oda.