Perhaps it's more due to the expectations I had assigned to the fall season after such a fruitful spring session, but I had high hopes that we'd get some creative approaches to the openers this season. Overall, while I think the music itself has gotten easier on the ear and catchier in the brain, I'm finding myself sighing more after the first ninety seconds of the episode.

I'm uncertain if it is due to the content of the shows. Long-distance hikes such as Space Brothers and Gintama' have resigned themselves to glancing out the window and appreciating the scenery, while shows granted a second season such as Sword Art Online and Medaka Box are sleepwalking, plenty satisfied with their content keeping the viewer's interest. Outside of the eternally-enjoyable Polar Bear Café and the Jojo's Bizarre Adventure remake, all of the shows in the Top 10 are first-time appearances.

The decent shows have managed to make ripples, but I can guarantee you this: the bad shows sank like shrapnel. You won't see To-Love-Ru Darkness and Girls und Panzer in these rankings, but you will see a show I wish we could scrub from the collective fanbase's memory, only for its incredible failure. I'm sure you've already guessed by now.

With that, I give you the hardest rankings I've ever had to sit through—the Top 25 opening themes of Fall 2012. It took us a little less than three weeks to completely fill out the Golden Ani-Versary of Anime roster. Our listing has a pretty good cross-section of bloggers and reviewers, writers and scholars, Ph.Ds and underclassmen, and I'm proud as fan to be a part of this deep analysis into the history of anime. The past fifty years have been both glorious and rocky for the medium in terms of critical acclaim, commercial success, and global acceptance, and considering its dependence on both human genius and electrical energy, the output in the next fifty years can be anyone's guess.

Now, it's time to...you know...do actual homework. A project this big is going to need some standards.

As the editor for this project, I've been debating many different aspects for our essays. After a few questions to the Tweeting public (and a mechanical pencil to the palm to get my thought process moving), I think we've come up with a general rubric for the blog's entries. 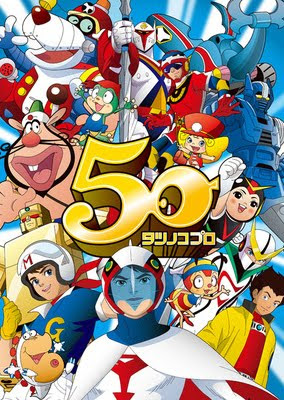 Regardless, the outpouring of support for the Golden Ani-Versary of Anime has been duly noticed. This was just some uncertain shot-in-the-dark project that I thought a handful of fans would be into. Instead, we filled up the roster in the span of two weeks! Incredible! It may not have gotten the attention that a petition for political or social awareness would get, but it's still impressive!

So let's get down to business.

Currently, we're trying to develop a sensible rubric for all of the essays and rankings, but we can definitely say that we have a time frame in mind. In the next few days, we'll develop a strategy for essay length and content, but for now we can at least settle on a pattern.

We've been hemming and hawing with various release schedules. Should it be year-long? Month-long? All done in the span of 24 hours? Should we start at 1963 and work our way to 2012? Reverse order? Should we throw darts at a Masamune Shirow calendar to randomly pick dates?It's been decided that we shall meet in the middle, both in duration and in sequence.

Once the calendar flips to 2013, we will start with our first year, 1963, the year that Tetsuwan Atomu debuted on Japanese AND American televisions. Within the same week, we will also roll out an entry on 2012, thus book-ending our fifty-year trip in the first seven days. The next week, we'll roll out 1964 and 2011, then progress inwards until we get to the late 1980s / early 90s. Once we get to the last ten entries in late June, we'll randomize the order and finish with 1989, the year that the great Osamu Tezuka passed away.

Each week, we'll accompany the entries with a profile of the year's timeline, covering the important events that defined the industry in both Japan and globally. Hopefully, approaching anime from its past and its present might give us all insight as to how we will view anime in the future.

Some of you might be too antsy to wait to see who has been selected for what years. We've provided the entire listing beyond the jump and hidden for spoilers, so if you want to remain surprised, don't access the jump!