There has been plenty of praise about the innocence that the series Yotsuba&! brought to manga pages. There's a lot about growing up that we have forgotten by becoming adults, and watching Yotsuba explore the world around her with a carefree attitude and a childish optimism is something to behold. However, reading all that innocence has got to make the average reader wonder where the lowlights of one's childhood are. We weren't all like Yotsuba when we were young—we were squishing bugs, getting into fights, and falling into open toilets.

For every giggling cherub, there needs to be a cackling problem child. 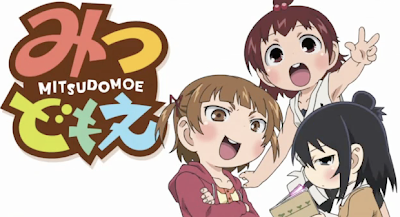 Spawned from the mind of gag-manga artist Norio Sakurai, directed by Masahiko Ôta (Minami-ke), and animated by the Aniplex crew through the Bridge Studios, Mitsudomoe takes that innocence that Yotsuba&! brings and plucks the leaves off of that lucky clover. The story focuses on the terrors brought by the three "Mischievous Marui Sisters" at Kamohashi Elementary with each triplet able to bring unique swaths of destruction—Mitsuba has a sadistic desire to dominate the smaller folk (only to get the brunt of the attacks), Futaba doesn't know her own strength and little else (outside of boobies), and the silent bookworm Hitoha...well... 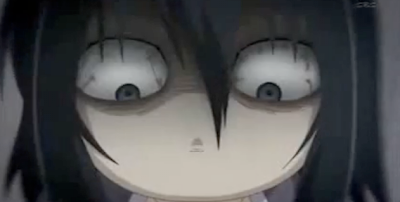 ...let's just say that Sawako from The Ring has a little competition.

While the show is about these unintentional hoodlums, we mustn't ignore their victims. The center of the trio's attentions criss-cross around Satoshi Yabe, their much-maligned sixth-grade teacher. Being new to the job isn't such a bad thing, especially with the cute-yet-ditsy Kuriyama-sensei equally new at the nurse's office, but the antics of the Marui Sisters present a new challenge. Throw in a pervert kid (what's with the "69" hat?), a popular kid who wants to avoid his fan club, and a few other flawed characters, and Class 6-3 could be one of the hardest classes to sit through.

There are a few misconceptions about this show that the original images might convey. First of all, there is very little about Mitsudomoe that appears to be "moe" in the first place. (It's more "tomoe", as in the symbol seen at plenty of Shinto shrines.) There may be emphasis on the ridiculous in this anime, but there doesn't appear to be much about the designs that provides attraction to particulars about the characters. In fact, the sympathy appears to be more for poor Mr. Yabe as he tries to be diligent and caring for his students while hiding his attraction for Ms. Kuriyama.

Most of all, this isn't your innocent love-comedy Hanamaru Kindergarten wannabe. This show gets pretty intense by depending on dirty comedy. Not only does the show get over-the-top with sexual innuendo (Futaba and Hitoha settle on "Nipples" as the name of the class hamster) and crotch-shot humor (a plan to bring Mr. Yabe and Ms. Kuriyama together involves just that), but a lot of the physical comedy is mixed with...bodily fluids. Not going to spoil just how blood, snot, and urine make its way into the show, but they do. Somehow. It's not pretty. 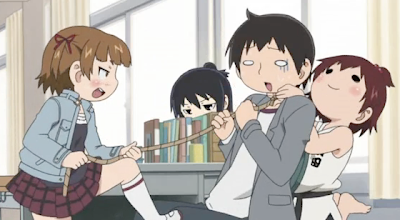 Mitsudomoe does go for the jugular with its jokes about breasts, nosebleeds, and pee, but I actually had to pause before I made my mind up about the show. While the class level for Mitsudomoe rivals all those shows that use poop as props, I had to wonder—when did elementary school turn into such a perfect sanitary institution? Fart jokes and potty humor defined elementary school for us, representing a time in a kid's life when he or she learned what was and was not appropriate. Heck, we were all a brat at one moment in our lives—why not watch a show about three of them? While there are parts of Mitsudomoe I didn't want to watch due to their filth factor, those parts were not only just as funny as the cleaner segments, but they were essentially foils to make the cleaner segments better in the end.

I'm surprised to say it, but Mitsudomoe's tongue-in-cheek humor might make it the biggest surprise of the summer TV season. It also makes me beg the question—is this why Yotsuba&! hasn't been animated yet?
Posted by Geoff at 8:30 PM