The written works of Fuyumi Ono may not be so famous over here in America, but that doesn't mean that anime fans have not been exposed to her. While Ono is primarily known as a solid horror writer, her works have been heavily influenced by mystery and have ventured into fantasy and the occult. Novels are her first mode of literature, but her stories have been adapted into light novels, manga and anime, including the Twelve Kingdoms mythological saga and the soon-to-be-released Ghost Hunt anime.

The latest conversion of her novel Shiki (composed of the kanji for "demon" and "corpse"), currently running on the Funimation website, tests the depths of previous psychological horrors. The novel itself was written back in 1998, a period coinciding with the success of Kôji Suzuki's Ring trilogy, but the story's manga did not see the light of day until Ryû Fujisaki (Hôshin Engi) started it in 2007. The show is currently running on Fuji TV's noitaminA time-slot (House of Five Leaves, Tatami Galaxy) and has been animated by Studio Daume under the leadership of director Tetsurô Amino (Macross 7). 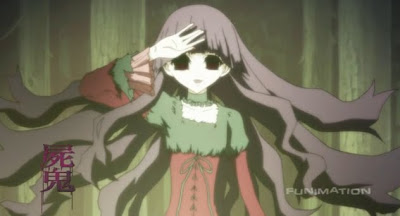 While thrillers in anime have usually been random in location and setting, Shiki takes the approach that has been demonstrated by the recent Higurashi no Naku Koro Ni series by bringing horror to the areas of Japan where the screams would likely be unheard—the villages barely touched by civilization. In the village of Sotoba, a hamlet known more for its construction of grave markers than its citizens, life is simple, but for pop-tart teenager Megumi, it is an insufferable torture for someone who dreams of a more glamorous life. Megumi's plans for escape gain strength when the news of a new family moving to the European-style estate in town spread through the small population.

Simultaneously, the citizens of Sotoba start to notice a slow pall enveloping the village. Dr. Ozaki from the village clinic and Muroi, the village priest, start to notice a drastic increase in deaths from "summer colds". One of Sotoba's newest citizens, Natsuno, has his own worries, forced to distance himself from a public questioning his parental situation and the prying flirtatious attempts from Megumi. When the two lines intersect and Megumi ends up as one of the corpses, Dr. Ozaki starts to suspect something worse than anemia. 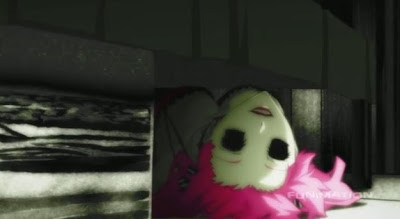 There's no beating around the bush with this series, but the horror is well-crafted through slow progress. The strangers to the village—the Kirishiki family, a regal couple and their eerie daughter—serve as obvious links to the mystery behind the deaths, but the series wisely keeps the villagers in the dark about their identity, almost to the point of obliviousness. Although the situations are supernatural, Dr. Ozaki's medical investigations give the show the atmosphere of an episode of House, the pathology of the sickness covered thoroughly. Natsuno's own descent into nightmare is just as slow, as he becomes haunted by Megumi's death. This couldn't be as simple as an infestation of vampires or some outbreak of cholera, could it?

Shiki's drawback may have been its over-dramatic push to distinguish the main characters from the rest of the pack. The art is pretty dynamic and painted with brighter colors, but some of the character designs from Fujisaki appear to be a bit rigid with unmoving hairstyles, and acting from the male leads can border on hammy methods. This use of more vibrant main characters is likely intentional, as the lack of embellishment could cause the public to question why Shiki was made as an anime instead of a live-action drama or movie. 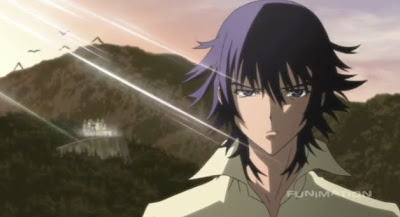 That being said, the character designs do not detract from the eerie nature of the story, a fitting rural opposite to the endless urban zombie horde from Highschool of the Dead. Unlike the unsmiling Sadako from The Ring and Kayako from Ju-On, the wide-eyed marionette expressions of the Kirishiki family bring a grisly sense of mirth to the horror, so much so the plot appears to be deeper than it actually is. Even the titles of each episode are plays on words, as numbers are turned into their frightening counterpart (i.e. the "ichi" for Episode 1 is written with the kanji for "blood").

Since it took over ten years for Shiki to finally see animation, it's hard to say if it is trying to capitalize on the cult success of Higurashi no Naku Koro Ni. Let's consider the similarities circumstantial, as Shiki opts to operate on its story with a surgeon's scalpel instead of a butcher's cleaver. If the path towards despair is meant to be slow for Shiki, we can only hope the progress leads to a bloody conclusion.
Posted by Geoff at 2:30 PM