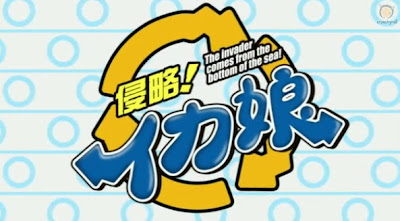 Not every tale from the sea is a Hans Christian Andersen romance. Not every struggle between man and fabled sea creature is meant to be labeled as a saga. Most of all, not every creature from the sea that seeks vengeance against humanity for its crimes against nature has the capability to succeed with its invasion.

Then again, has there been an invader so deceptively cute in its ineffectiveness? ("Puchuu! Puchuu!" - Ed.)

Herein lies the conundrum for the titular character in Invasion! Squid Girl (Shinryaku! Ika-Musume), a story animated from the mind of mangaka Masahiro Anbe. Sometimes humanity just doesn't take the invasion seriously enough, but when you're a dojikko from the deep, the deck is already stacked against you. 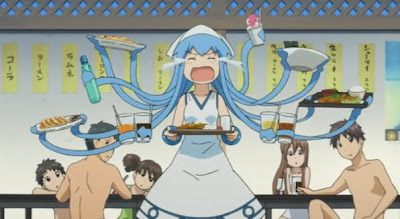 Currently running on Crunchyroll as Squid Girl, this new show animated by Diomedea (Bokurano) features the episodic adventures of a half-girl, half-squid who has come to the surface to teach humanity a thing or two about abusing their control of the sea. However, despite being able to control her tentacle-like hair for combat, Squid Girl isn't exactly prepared for the fight—her cute appearance makes her status as an invader hard to take seriously, especially when she appears at the seaside restaurant "Lemon" and is mistaken for the part-time help.

While the shop's owners Eiko and Chizuru figure Squid Girl to be just a kid in costume, the resulting dismissal brings about her clumsiness, as her demonstration of her power results in damage to the restaurant. Unable to develop a spine to stand up to the proprietors (cephalopods are natural invertebrates, after all), Squid Girl finds herself having to work off the repair bill for the humans she was supposed to conquer and learns that humanity is a little stronger (and stranger) than she thought. 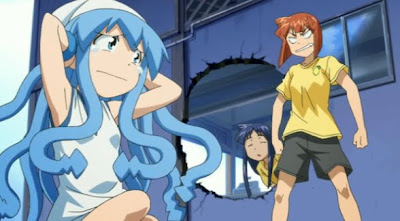 Considering the direction is done by Tsutomu Mizushima (Bludgeoning Angel Dokuro-Chan, Hare + Guu), I was expecting the comedy to be off-the-wall and perhaps a little invasive towards fourth-wall humor, but the production of Squid Girl is done in such a reserved manner that the lighter comedy fits it admirably. The situations involving Squid Girl's slow understanding of society are paced well with her cluelessness being the key comic device. More importantly, the art's smooth design and simplicity meshes well with the comedy, so even the predictable comes out feeling comfortable.

If there is one debatable thing that comes to mind after watching Squid Girl through Crunchyroll, it's the uncertain translations of the script. Squid Girl uses the suffix de geso (geso means "tentacle") in place of the Japanese copula desu, so her lines are occasionally written to reflect the "squid" in the meaning. At times, the translation can be adorable ("Wait a squidly minute!"), but sometimes it can come across as forced and unnecessary: 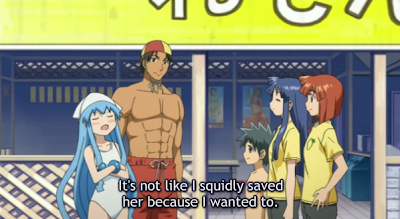 The translation isn't terrible, but it's not exactly easy to digest, and you may come across purists who may find this translation as extraneous (or not going far enough de geso!)

It may look too simple to result in an enjoyable show, but perhaps the best thing Squid Girl has going for it is the feel of a sit-com. Squid Girl is painfully oblivious to some surroundings, only to be overreactive to others, and that common formula makes for some enjoyable entertainment. The episodes are short, succinct, and silly, but not to the point of disbelief. We're not saying that the humor will get old any time soon or that the show will turn into a cheesy version of Alf, but for now it works rather well. 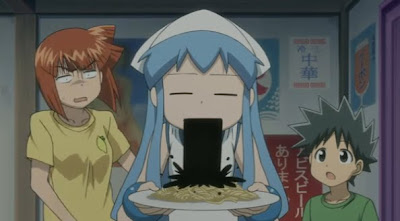 For what it's worth, there was a need for a slower-paced anime comedy this season, especially with the speed and the magnitude of the lechery we've seen in some of the other shows. Squid Girl is calm yet humorous with its serene location and oddball characters, and I for one welcome our new squid-vaders.
Posted by Geoff at 6:00 PM