Going into the Fall 2010 season was a bit of a renaissance for me. I'll be honest—I haven't really been too excited about animation prospects for a few years. My "collection" likely reflects more of my lack of interest, as I have more VHS copies of anime than I do DVD copies, but the easier access to material and a trip to Japan over the spring has rekindled curiosity.
It's hard to tell just how long that curiosity will continue to burn from the old hickory put on the fire, as this season really tested patience. With the Tokyo Metropolitan Assembly putting stricter regulations on anime and manga near the end of the season, it was difficult not to notice the hard sell that animation companies were giving to the older crowd. Heck, the lineup for Fall 2010 would have been crippled if the government had its say on what qualified as "extreme".

That being said, it was hard to pick out what was truly the best and worst of the season—there really wasn't much middle ground to work with. 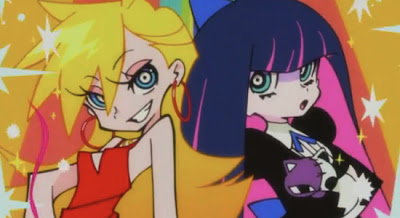 Best In Show (single-season)
Panty & Stocking with Garterbelt
Honestly, it was hard to put Gainax's parody of the Cartoon Network in this spot for a number of reasons. Yes, the show was gruesome and grotesque with its treatment of bodily fluids and scat as if they were champagne and chocolate. Yes, there were shows that likely told its story better. And yes, the last episode chokes on Gainax's trademark "non-ending ending" cliffhanger that may have angered fans.

But how can you say that you will forget such a season? The styles so varied, the soundtrack so fuzzy from zizz, the characters both off-the-wall bonkers and satisfyingly likeable, the subjects of sin so close to our own without actually invading the fourth wall, Panty & Stocking pretty much hit us with everything from the ACME catalog and then some. It was sexy self-gratification with experimental silliness and tongue-in-cheek humor. If Gainax doesn't do the obvious and produce a second season, fans will be devastated.

Worst In Show (single-season)
Yosuga no Sora
It didn't even merit much of a glance after the first episode, even with the premise of crowding four story arcs over twelve episodes through four different branching universes. The story was so distilled, the syrupy drama separated from the two-minute splash of comedy at the end. The characters were unexciting, and the visual-novel situations were brittle from too much exposure.

Left with no energy remaining to fuel it, the show basically tries to recover by pushing the taboo envelope further and clobbering the audience with the shock of "twincest" between the main characters. It just turns the show into a bizarre tragedy of relationships that don't cement a specific conclusion into place. Vague, unresolved and perhaps unintentionally offensive, Yosuga no Sora is a show that deserves no attention. 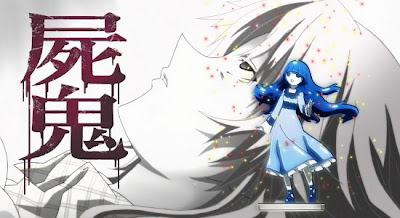 Best In Show (multi-season)
Shiki
Considering that it was in competition with the likes of Hetalia, One Piece, Black Butler II and assorted others on the Funimation website during the summer, the noitaminA series silently rode under the radar. A story about vampires just didn't equate to a unique feel, but once the show hit its halfway point and sold itself as a full twenty-two-episode show, it took off like a rocket.

While the show started to pick off the small town's population slowly, the midpoint of the series drove the human population into something beastly. Once thought to have too many characters for a plot, Shiki forced them into two sides of a war for survival and shocked the audience with horrific slayings of characters considered too bold to die in such minor situations. Without giving up too much plot, the main character Toshio perhaps pulls off the best psychological performance of the season, investigating the limits of okiagari vampires by experimenting on his own wife.

Worst In Show (multi-season)
Motto To Love-Ru
With all of the characters pretty much introduced in the first series, there was no need for Motto To Love-Ru to follow any sort of pattern or tell any particular extended story. One moment, our lucky protagonist Rito is feeling up one female classmate due to a misunderstanding. The next part, he's naked in front of the violent lolita and getting the tar beat out of him. The last seven minutes involve some touching moment with the uptight classmate, his school crush or the ditzy alien princess.

Was there a reason to really bring this show back if every episode is the same? Even the ending fails to deviate from the manga's ending, giving us the generic sit-com denouement of Rito surrounded by women reacting to his directionless admission of love. Harem show of all harem shows, Motto To Love-Ru lived up to its expectations of being a total disappointment. 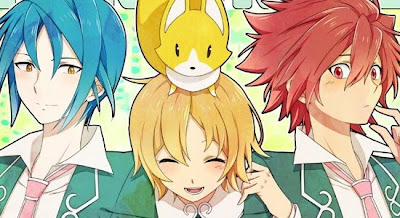 Most Potential (continuing series)
Star Driver: Takuto of the Radiance
When it was announced that Bones would be the studio handling animation duties, there was no doubt that the mecha designs in Star Driver were going to be a work of art. Originally founded by Sunrise (Gundam, Escaflowne) members, Bones had designed some of the more vivid machines (RahXephon, Heroman) and constructed some of the more colorful stories (Fullmetal Alchemist, Wolf's Rain) in anime.

It wasn't expected that a story that wasn't based on a preexisting manga or light novel would work so well. Perhaps there are no expectations for how the story will unwind, but the conversations between the characters are lighthearted yet poignant, stoic yet comfortable like an episode of Utena. Takuto, Sugata, and Wako make perhaps the best trio in anime since Naruto met Sasuke and Sakura.

Least Potential (continuing series)
Bakuman
So far, I have yet to hear a critical voice that has been pleasantly surprised by Bakuman, the animated adaption of the award-winning Shônen Jump manga about creating a manga. The first episodes of the show had nothing that really differentiated it from the manga (or the productions of the "manga" on YouTube), and the show is almost too relaxed to grab anyone new to the series.

It almost feels as if the show was to be gift-wrapped and presented to all of the fans that wanted to see it animated from Day 1, a reward for being so devoted to the comic, but I wasn't impressed with the show's first episodes. The fact the show will run more than the allotted 25 episodes tells me that it's popular enough in Japan, but for people overseas that may never experience the joy of being a manga star, it doesn't seem to translate into excitement. 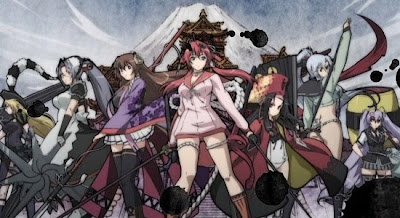 Biggest Surprise
Hyakka Ryôran Samurai Girls
Yes, the show pretty much twisted samurai legend in order to put a whole bunch of half-naked women in the hands of an unwilling male, but the end product of Hyakka Ryôran actually managed to do better than expected. It took a little bit of bitter medicine to stand listening to Jûbei's ditzy split-personality, but the action was solid and exciting, and the climax was genuinely dazzling. Most important, the ending actually felt like an ending with some actual sacrifices to be made.

Considering the artwork was also so deeply rooted into the monochromatic ink of Japanese calligraphy, it was tempting to be overwhelmed by the use of stray drops as censors for the nudity, but the show slowly drew color for those spatters. (Besides, they're easier to cope with than BLINDING SUNLIGHT.) Hyakka Ryôran may have been Tenchi Muyô in Edo Japan, but it was still a surprise to see it work.

Biggest Disappointment
Soredemo Machi wa Mawatteiru
Akiyuki Shinbo and SHAFT laid a few eggs this season. While Arakawa Under the Bridge*2 got a little too wrapped up in drama, Soredemo Machi wa Mawatteiru depended too much on impressing the audience with camera angles and art. The story was meant to involve a maid cafe, a high-school detective, and/or paranormal activity, but just ended up some sort of soupy mix of the three without ever making headway.

In short, the show left me complaining for more, much in the same nasal manner that Hotori hits the audience with every episode. It could have been so much better if we saw the show's objective by the end of the first episode; instead, we got a slice-of-life show that will never measure up to the likes of Sazae-san or Chibi Maruko-chan. 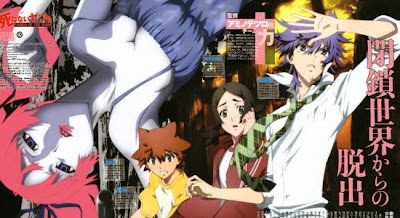 Best Overall Show
Shiki
Yes, this might be a bit unfair to shows that have already finished, but as Chris Beveridge of Mania.com expressed on Twitter regarding his own choice of Shiki as the Best Simulcast of the Year, "The strength of the first 21 (episodes) certainly makes it a given, regardless if it ends badly." We probably judge our shows too much on the ending of the series, so it was great to have a show out there that finally took its time, ignored any sort of high-school setting, and took a sledgehammer to everything we knew about anime.

Shiki was not only better at psychological horror than the likes of Higurashi no Naku Koro Ni and Highschool of the Dead, it took it one step further. It made each character, location, and occasion matter. It made vampire stories exciting by drawing out the tension over time and through dozens of people. It made the noitaminA block a definite must-see in the future. Shiki succeeded with its story, as old-fashioned as it may seem, by mixing European gothic style with the loneliness of Japanese life in the boonies.

If Shiki is released in North America, I will no doubt pay to see it again.