When I reviewed bad anime, I apologized.
When I didn't review the anime at all, I said nothing.

This is an ode to all of those we offended by not reviewing what we considered average. It wasn't the fault of these shows; it was our own fault. We just didn't have enough time for everything, and these shows just didn't charm us at the time. In lieu of flowers and monetary compensation, we provide snips of these middle-of-the-road anime shows from the Fall of 2010. 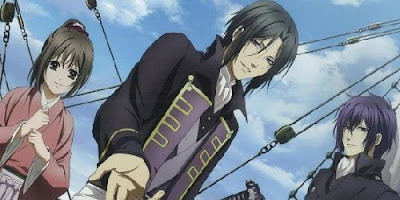 Hakuôki Hekketsuroku
Synopsis: Based on the "reverse harem" otome game of the same name, Hekketsuroku is a continuation of the first series, Hakuôki Shinsengumi Kitan. Chizuru, the daughter of a prestigious doctor of Western-based medicines, is taken in by the Shinsengumi during her trip to find her father. The protectorate of the shogunate vows to protect her from a scourge of demon-driven samurai called "Rasetsu", only to discover that Chizuru herself is one of the "Demon Clan" that contains the purest of blood, making her the ultimate prey for the Rasetsu for its continued lineage.

Needless to say, the good doctor may not be as good as considered. The medicine he has created, labeled "ochimizu", has the power to heighten senses and power, but its side effects are devastating to the drinker, as it turns them into a bloodthirsty Rasetsu in the process. The second series, treated more as a continuation of the first, chronicles the plight of the Shinsengumi as it tries to both protect Chizuru from the demon forces and deal with their own troubles as demonized humans who drank the medicine for its own survival.

Why wasn't it reviewed?: The show has some good moments, but there just hasn't been much exposure from the series in the US. Hakuôki is to be treated as a pretty good show in terms of its artistic aesthetics, but it requires a start at the beginning. The other burning problem in my mind is that this series seems to just use the famous name of the Shinsengumi in order to tell a story about vampires. Can't say I'm a big fan of revisionist history, so the interest to follow the show was never there.

(Also see: A Certain Magical Index II. I'll get to this shows in time, but it just didn't hit my senses enough to return to "Go". In due time, in due time.)

Soredemo Machi wa Mawatteiru
Synopsis: A "slice-of-life" show produced by the creative eye of Akiyuki Shinbo and Studio SHAFT, Soredemo Machi wa Mawatteiru (And Yet The Town Turns) covers the high-school life of Hotori Arashiyama, an aloof maid-cafe waitress who has a thing for detective stories and a thing against her math teacher. The show covers the various situations Hotori and her friends find themselves drawn into, most of them revolving around the operations of the cafe itself.

Why wasn't it reviewed?: There's...nothing to really review.

The opening and ending themes are rather fun and catchy, and the shifts in perspective that Shinbo emphasizes in his shows are quite pronounced, but Soredemo is a show that even his talents in direction can't float. The plot seems to wander aimlessly from episode to episode without really building direction towards a reason for its animation. Most of all, the whiny voice of Hotori, no fault to her actress, makes the show grating to follow. I've heard that some others have found charm in her annoying personality, but her lack of maturity gets me as mad as her math teacher gets. 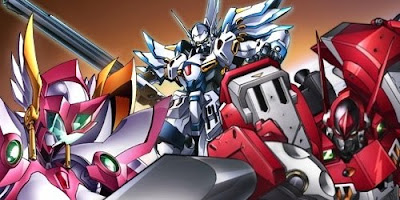 Super Robot Wars OG: The Inspector
Synopsis: This show follows the plot covered in the Super Robot Wars: Original Generation 2 video game, but basically follows the timeline from the previous SRWOG series, Divine Wars. The war between the humans left on Earth after a series of meteor strikes and an alien race known as the Aerogaters unfortunately presented the opportunity for a rogue faction, the "Divine Crusaders" to challenge the Earth's government. While most of the civil war between the two factions has ended, there's now the reemerging threat of the Aerogater fleet...

Why wasn't it reviewed?: There is still quite a lot of potential for this series to be covered in the next few weeks, as it is being run online on Crunchyroll's website. The opening theme is a powerful force from the notorious "JAM Project", a unit that always cranks the volume of the show to eleven, and if that was the only reason to watch the show, I certainly would watch it daily. The flip of characters—a substitution of the main characters from the first series with its backup team—is also a pretty clever change to its format. I never would have considered seating the starting line-up for the bench players.

The show is directed by veteran Masami Obari (remember Voltage Fighter Gowkaizer?), so I should have been expecting the breasts to be polished to a brilliant gleam (even on the mecha themselves!), but a lot of the disappointment comes, once again, from the substituted characters. Emotionless Lamia Loveless can't seem to get her Japanese straight, and ATX member Excellen comes off as a ditsy pilot that just rubs against all standards of mecha shows. SRWOG: The Inspector's bound to have the action and energy mecha shows always exhibit, but I can't get into the mechanics if I can't get into the characters themselves.

Next time: We're sorry for not reviewing the disappointments!
Posted by Geoff at 2:45 PM